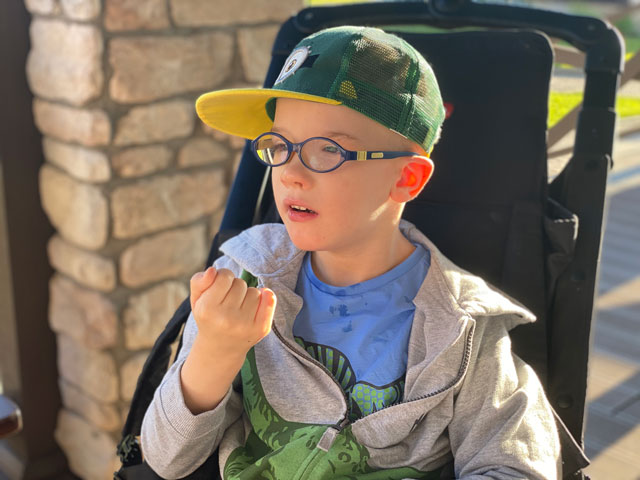 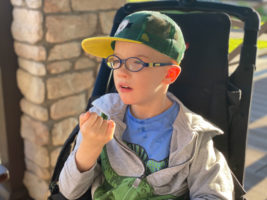 Our thanks go to Renault Russia for their help in paying for the course for Nikita! We appreciate support of our partners as together we can help families with kids who have severe multiple developmental disorders to make an important step in their progress!

From his mom’s letter:

“My husband and I had been eagerly waiting for our first-born baby when during the third trimester of my pregnancy the still unborn baby was diagnosed with enlargement of the ventricles of his brain. I visited the clinic for sonography and control almost weekly. I stopped taking delight in buying onesies, baby booties, cribs and strollers for our baby – now the only thing I had in the forefront of my mind was worrying about what will happen with my son when he is born.

At long last, on January 25, 2014 my dear, one in a million sonny, my Nikita was born! Unfortunately, the enlargement of the ventricles didn’t go away – it persisted. When Nikita was one month old, we were admitted to St. Petersburg City Children’s Hospital #1 where my son was thoroughly examined – the doctors wanted to find the reason for his condition. Plenty of times they had to take blood from my little darling’s veins, did a spinal cord puncture, X-rays, MRI, endless tests…

However, the doctors failed to get to the core of what had happened to Nikita. The baby might have suffered an infection in utero or the reason might be brain malformation. No matter the reason, Nikita was diagnosed with cerebral palsy.

When Nikita was four months old, we applied for disability benefits. He failed to roll over and hold his head up, showed no interest in his toys and didn’t reach out his hands to them, was idle and slept incessantly. It seemed that Nikita was even slow when reacting to pain. We kept on visiting various experts trying to solve the problem and alongside this continued with massages, swimming and physical therapy in our hometown of St. Petersburg.

From March 2015 till now we have been taking regular rehabilitation courses in children’s rehabilitation center “Rodnik” situated not far from where we live – they include Adapted Physical Education, massage, sessions with a speech therapist, sensory integration and other exercises focused on rehabilitation.

Till Nikita was two years old his arms didn’t move at all. But daily exercises changed the situation – not only can my son now reach for objects he’s interested in, but he plays with them and crawls leaning on his hands! It is a great achievement for us to see our son move around the rooms and show interest in people and things around him!

In August 2015 we had another stroke of misfortune – Nikita started having serial epileptic seizures. We had to forget about rehabilitation for a year to cope with the new medical problem – seizures that progressed every single day hampering the child’s growth and development.

Nikita is now six years old. His progress in growth and development is slowed down by recurrent setbacks due to the seizures. But anyway – even a single rehabilitation activity helps Nikita go on!

He has no friends, playground activities and the usual childish antics in his life. He lives according to a strict routine – we sleep, eat, do rehabilitation exercises and take expensive anti-seizure drugs in the morning and in the evening.

Unfortunately, Nikita still lacks basic skills: he can’t sit, stand, walk or eat liquid food. He doesn’t speak. He lags behind in his mental development and instead of speaking uses emotional sounds and exclamations.

As Nikita suffers organic lesion of the central nervous system, atonic-astatic form of cerebral palsy, paralytic strabismus and a number of other severe diagnoses, he needs a comprehensive individual rehabilitation course which is available only in for-profit rehabilitation centers. One of them is the rehabilitation center “Rodnik”. We’ve had courses there since March 2015. It employs top experts and the duration of procedures is 60 minutes whereas other centers offer only 30 minutes of activities with kids at the same price.

Nikita’s dad is the only breadwinner in our family. He works for a construction start-up and his job is low-paid. Our family budget is supported by social benefits – a monthly childcare allowance from the social protection authority and Nikita’s disability pension.

Nikita is very talented, so rehabilitation measures help him to learn something new each time. My son got to like music and musical toys and even learnt to switch them on.

Nikita becomes more and more confident in his actions. He is gaining weight bit by bit, he’s getting more muscles. His back got straighter and his arms – stronger. Nikita can now stand with support, for a short time and with some back-up, but it’s a real breakthrough for us! We see amazing results of work by Adapted Physical Education specialists and massage therapists. Nikita can now walk with support more confidently, sit on the floor on his own and hold his back straight and head up.

Speech therapy helped him to improve muscle activity of the tongue, and my son started pronouncing separate sounds. His fine motor skills got better and he started to show interest in people and things that surround him. Nikita became more curious, he learnt to crawl to the door and ask to go for a walk.

Dear benefactors, we’re asking for your help! The world is small as we are told, but there are people with hearts of gold who, we are certain, will empathize with us and help us raise the money required for another rehabilitation course for Nikita!”

We are so happy that we’ve managed to help Nikita’s family!