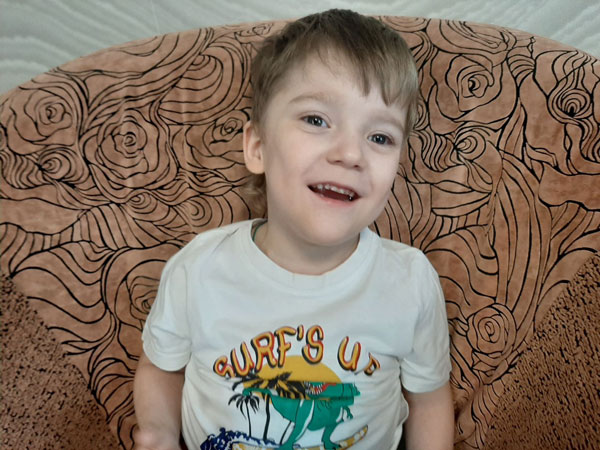 Required: rehabilitation and physical therapy course in the Center for Physical Therapy “Galileo” (Moscow) worth 202,900 rubles.

Alyosha from Volgograd is 4.5 years old. His family, quite common, lives in Volgograd in a house of their own. Both mother and father work, set up house and bring up 10-year-old Yegor, Alyosha’s elder brother. After their first son was born, the parents didn’t even dare to dream of a second child – the doctors told them it could hardly happen. But then a miracle pregnancy happened in 2015. It went smooth, but at the 19th week the expectant mother felt cramps and had to stay at hospital. Two months later, at the 27th week, on March 31, 2016 a boy was born prematurely after a C-section. He weighed 1,020g, was 37cm in length and in critical condition. He couldn’t breathe on his own, suffered from hypoxia and a blood stroke. He was taken to the ER and put on a ventilator. Dropsy of brain was progressing. The following 4.5 years Alyosha’s mother has been living in constant fear for her child.

Back then the doctors did their best: Alyosha was operated on in the ER of the maternity clinic and a special implant was put in place for efflux of fluid. During the following five months 80ml was tapped daily!

Bypass surgery was put off four times for various reasons. Finally, when the boy was six months old, he was operated on: a bypass was implanted to drain the liquid from the brain to abdominopelvic cavity.

From his mother’s letter: “Back in hospital I started searching for medical institutions that could help with treating cerebral palsy. I knew that the sooner we started – the better. Two months after the surgery we were in Moscow, in the Center for Physical Therapy “Galileo” which was recommended to us by the neurologist. We found considerate and highly committed experts there who jump-started Alyosha’s treatment and recovery. We also had treatment in other rehabilitation centers – “Rodnik” in St. Petersburg, “Gherda” in Tolyatti, “Novaya Planeta” in Moscow, the Russian federal center “Detstvo” as well as abroad – “Olenek” (Warsaw, Poland) and “Atlantis” (Belgium). On top of that we had five courses of Tomatis therapy in Volgograd. Having taken a learning course for mothers, I’ve mastered the methods of Vojta and Bobath therapy, kinesiotaping and manual techniques as well as how to work with vibration platforms – we do a lot ourselves!

The doctors and specialists often admire our efforts when examining Alyosha, marveling at the results. When our son was ten months old he started rolling over from back to tummy, at 1.6 he sat and started crawling, at 1.10 – creeping on all fours, at 2.5 he stood up and started walking around with support. Alyosha can now walk with a walking aid or when an adult is holding his hand. He can also stand on his own for a few seconds.

Kids with cerebral palsy need regular rehabilitation – four times a year, as it’s a continuous process. However, as the medical centers were closed during the lockdown, my son took his last course back in February, 2020.

After each course we are happy to see the results: my son has reduced spasticity in his arms and legs, he has acquired more active movements and new skills. We also witness psychological and emotional improvements and every time we make a giant leap towards his walking independently”.

When people are left alone with their misfortunes, they give up. But when they see or feel sympathy and support from others – they regain their strength and willingness to achieve more, both for themselves and for those who helped them! We can help this family right now.

The Fund is launching a fundraising campaign to pay for a rehabilitation course for Alyosha!