Congratulations, many thanks, and surprises for a great friend of our Foundation, Tony Watkins

Diema's Dream Fund > Actions > Congratulations, many thanks, and surprises for a great friend of our Foundation, Tony Watkins

A great friend of our foundation, businessman and musician Tony Watkins celebrated his birthday on November 20. We congratulated Tony on a small party he organized on November 21 at the cozy LifePub club-restaurant.

Due to some restrictions, the performance of Tony and his group “Smokebreakers” was available to vising only a small part of his friends and admirers of his musical talent. But for us, it was quite important to be there to have a chance to celebrate and thank Tony on behalf of our nurse children. Elena Volodina, the head of the Diema’s Dream Fund, and the team of the foundation decided to made a surprise for the birthday man: they came to the party, and also invited the journalists who write about charity to introduce them to Tony. Congratulating our friend, Elena A. Volodina told the guests about the long-term and very kind contribution Tony makes to the life of the Foundation. And some of guests were really surprised – this side of the birthday man was not widely known. 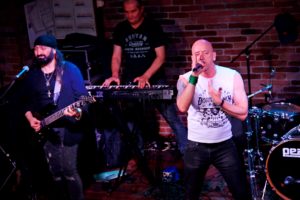 Anthony Watkins is one of the Friends of the Foundation, a businessman and musician who has lived and worked in Russia for a long time. He has supported many of our projects and charity programs since the first day. For a long time, Tony headed the well-known company Electronic Arts, a famous developer of computer games (one of the most successful projects is the real-life simulator called “The Sims”). EA actively supported the nurse children of the foundation.

For example, his donation of 504 000 rubles in 2017 was spend for the equipment for the children’s orthopedic department of the Federal Bureau of Medical and Social Expertise. We bought a device for electrical muscle stimulation with low-frequency current called “AKorD-mini”, 15 wheelchairs of various modifications (by the “ArMed”), 5 modified patient lifts (known as “Balkan arch”) and baby food for Yana, the hospitalized orphan. Same year, EA donated 250 000 rubles to our foundation. In 2018, we spend this money to 2 Adele suits (rehabilitation means), 3 anti-bedsore mattresses, 15 patients lifts, 30 modifications for the patient lifts, as well as diapers and hygiene products for the same Federal Bureau of Medical and Social Expertise. All this equipment significantly improves the conditions and effectiveness of the rehabilitation of children in the postoperative period and helps to make life easier for children during the treatment of diseases of the musculoskeletal system. Therefore, such support from EA was very significant for the children who came and still come from all regions of Russia for operations and rehabilitation. 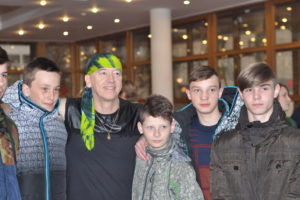 What is more, Tony helps the Foundation with his creativity. In 2017 and 2018, he held a charity shows “DREAMS” to support of the children of the Diema’s Dream Fund. The funds raised were spent to help the Federal Bureau of Medical and Social Expertise, and other hospitals and children. For example, thanks to the DREAMS show, which took place on April 2, 2018 at the Russian Song Theater, 1 743 275 rubles of fund were raised. It was a big and amazing charitable music event: 1 000 spectators gathered to support the foundation and 300 nurse children of the foundation watched the show.

Tony also often helped the Foundation as a private benefactor. He made a lot of large donations.

As a gift, we gifted Tony jigsaw puzzles of painting “Mutations” by Spanish artist Ima Montoya. This piece of art was presented at our charity event in 2017. Tony liked the picture very much, but another participant of the evening became its owner. We decided to fulfill Tony’s dream, and now he will also have this picture, even though as a jigsaw puzzle.

We thank Tony for his trust, support and invaluable help and wish him health and energy to realize all the professional and creative plans!

Thanks for the photos from the event to Snezhana Demenova.