Timur Z., born in 2016, Ufa, the Republic of Bashkortostan

Diema's Dream Fund > We have helped > Timur Z., born in 2016, Ufa, the Republic of Bashkortostan 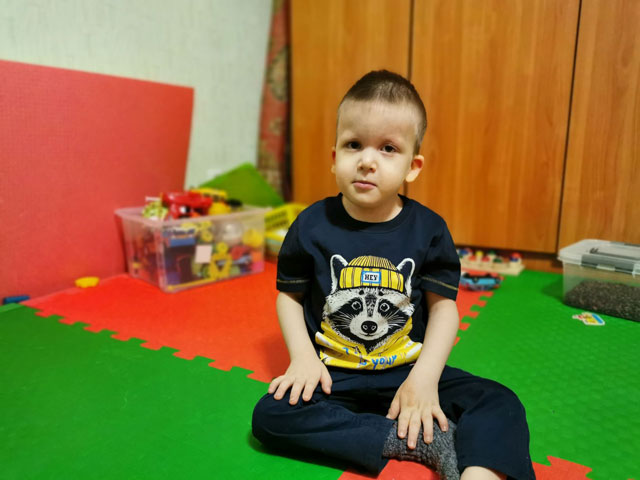 Due to financial support from our partner Renault Russia we managed to pay for the rehabilitation course for Timur.

Timur was a long-awaited baby. His parents were eager to have two kids. After they’d had their first-born son Amir, they planned to have the second baby two years later so that the kids could have fun growing up together. But the second pregnancy wasn’t successful, and by the long-awaited third pregnancy Amir was already seven years old.

From their mom’s letter:

“I had a difficult labour. Right after Timur was born the doctors put him on my chest for one minute and then took him away to the ICU. On the following day I was allowed to visit him in the ICU ward – I could only stroke him softly, although I was longing to take him in my arms, hug and take with me. Two endless days later we were transferred to the neonatal pathology unit, where the chief informed me that my son had intraventricular hemorrhage in the left ventricle of his brain. Two weeks after I’d given birth we were discharged.

When Timur was eighteen days old we consulted the leading neuroscientist in Ufa and were advised to follow a course of pharmaceutical treatment. We followed all the recommendations diligently, but our sonny failed to develop – he was lying on his back, didn’t roll over or crawl, failed to hold his head up and showed no interest. He took no notice of toys, simply sucking his finger and lying.

When Timur was five months old, the neuroscientist recommended that we take a few courses of massage. After two courses Timur managed to raise his head and hold it up for a few seconds, while lying on his tummy. Four months later we set off to Harbin, China where Timur began to hold his head up much better, express emotions, smile and recognize his mom.

At 1 y.o. Timur was diagnosed with atonic-astatic cerebral palsy and we applied for disability benefits.

Over 2017-2019 we took quite a few rehabilitation courses – in Harbin (China), in our home town Ufa, five courses in Saint-Petersburg, two in Yuncheng (China), four in Chelyabinsk, two in Yevpatoria and four in Warsaw. Between the courses we never stopped doing massage, physical therapy and acupuncture as well as continued pharmaceutical treatment.

As a result of continuous treatment and regular rehabilitation courses Timur has learnt a lot. He can hold his head up, roll over and sit on his own and is much better at controlling his balance when sitting. He’s developed a defense reflex when falling ahead, partially understands the speech addressed to him, stands up with support and can stand on his own up to 5 minutes. He can crawl on all fours, walk with support, makes up to 10 steps on his own, climbs onto the sofa and gets off it, says “mama”, “baba”, “papa”, “am” and plays with his toys – cars and toy blocks.

But now is not the time to rest – we need regular rehabilitation courses with no more than 2-3 months of gaps between them to ensure that Timur develops the skills he acquired.

Timur’s dad is the only breadwinner in our family. I had to quit my job as Timur couldn’t start kindergarten. We also have an elder son Amir who is 11 years old now. We have to spend a great deal of the family’s income on treatment and rehabilitation courses for Timur. The cost of another rehabilitation course in the center “Rodnik” (Spring), St. Petersburg, is 155,000 rubles, which is a huge amount of money for our family. We simply can’t afford it. We lay our hopes on this course – we believe that Timur will learn to stand up and walk on his own as well as speak.

Timur always demonstrates great results after each rehabilitation course. Our life is now mostly focused on his treatment. Even small steps and improvements mean that the whole family can lead a better life and feel more confident about tomorrow.

Timur is only four now, so he’s got every change to live a better and more interesting life when he becomes more independent provided that he gets continuous treatment and regular rehabilitation courses”.

We would like to thank Renault Russia for their help in paying for the course for Timur!

Together we can make a difference!