In Obninsk, a round table was held on the results of the Portage Pilot Project.

Diema's Dream Charitable Foundation > News > In Obninsk, a round table was held on the results of the Portage Pilot Project.

On July 1, 2022, Obninsk hosted a round table “Overview of the results of the Portage Pilot Project” in the State Budgetary Institution of the Kaluga Region “Obninsk Rehabilitation Center for Children and Adolescents with Disabilities “Doverie”.

More than 1,000 children with developmental disabilities receive help at the Obninsk Rehabilitation Center annually. This institution is unique in its structure. Here they begin to work with children with SMDD, sometimes even before they are born. They help kids and grown-ups alike. Safer children after rehabilitation enter ordinary kindergartens and schools, start families. Children with the most complex developmental disorders, growing up, continue to visit the department for young disabled children – workshops.

The team of specialists is making every effort to meet the needs of the family as much as possible, and as a result, the number of orphans with TMND has decreased significantly in the Kaluga region and now only 2 out of 17 orphanages remain here! Foster parenthood is very developed here, even for children with disabilities.

According to the Pension Fund, there are more than 4,000 disabled children in the Kaluga Region, of which no more than 200 children have the status of orphans.

Here we have trained a team of specialists in the Portage technique, which is able to work with severe and multiple developmental disorders (SMND) themselves. Now each team member can teach a child more than 640 life skills: infant skills, cognition, speech and communication, self-care and socialization.

5 specialists and 5 children took part in the Pilot project. The main task in the course of the project was to train the specialists themselves and develop their practical skills in following the principles of Portage. An important result was the experience of involving the parents of children in the process of developing skills.

As a result, little Liza, who suffers from cerebral palsy, delayed motor and speech development, learned:

(Self-service 7) Skill: eats pureed food. The skill has been worked out.
(Motor Activity 36) Skill: Licks lips. The skill has been worked out.
(Cognitive Activity 3) Skill: Takes items out of an open box or container by reaching into it with a hand with a physical prompt. (Physical cue at the elbow level – the teacher controls the child’s hand, holding his hand at the level of the child’s elbow. The child has more independence, and the parent has less and less control over the child’s movement). Skill in the formation stage.

(Cognitive Activity 5) Skill: Imitates placing an item in a box or other container. Skill in the formation stage.

Zips and unzips without inserting into the zipper with full physical prompting (Self-Service 24).
Picks up similar items (Cognitive Activity 18). Petya selects the proposed similar items.
Takes off shoes when they are laced and unfastened (Self Care 24).
Repeats sounds made by adults (Speech and Communication 1).
Uses the toilet when defecates, may have one accident per week (daytime) (Self-care 38). Petya gestures that he wants to go to the toilet, asks his mother to take him. Skill in the process of formation.

Self-service 14 : He eats ordinary food with a spoon. Misha eats with a spoon without any physical prompting from an adult.
Development of physical activity 66: Jumps on the spot, pushing off with two legs. Misha pushes off the floor with the full support of an adult. Skill in the formation stage.
Cognitive Activity 19: Draws scribbles. With partial support, at elbow level, Misha holds a brush and makes a few strokes of paint on paper. Skill in the formation stage.

Kirill’s skills at the beginning of classes: he did not undress himself, drank from a bottle with a pacifier, sat at the table for several minutes (5-7 minutes), then jumped up, did not show interest in an adult and toys, did not talk, only sounds of discomfort.

The first 2 months worked out one skill, the focus of attention, so that the child watched what he was doing: Pushes 3 cubes set in the form of a train.

When the skill was worked out, 2 more skills were connected: self-service, socialization:

He puts his hands in the water and, imitating adults, runs wet hands over his face.
Reaches and slams the reflection in the mirror or another child

At the moment Kirill:

he takes off his shoes without a fastener, a jacket (completely), a cap
approaches the teacher and asks with a gesture to play catch-up
at the table can be engaged without a break for 25 minutes 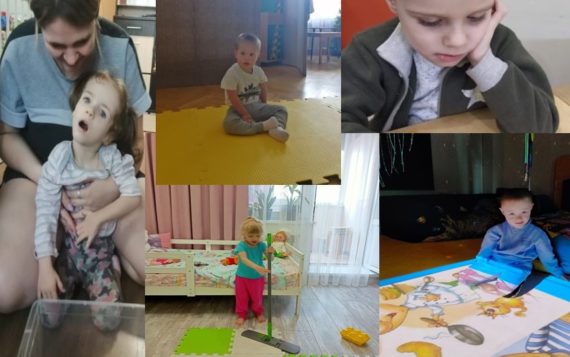